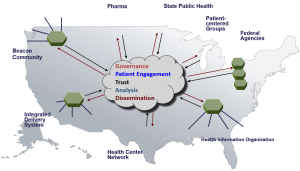 This image courtesy of Charles P. Friedman is shared under a CC BY NC SA license.

The conceptual structure for the course derives from the statement below that expresses the purpose of health informatics.

This course, as an initial immersion into the field of health informatics, will examine the domains, methods, and classes of information resources that, together, create the scaffolding of the field.

After completing this course students will be able to:

After completing this course students will be able to:

Charles Friedman joined UM as Professor and Director of the Health Informatics Program after 8 years of work for the federal government, prior to which he served for 26 years as a university faculty member and administrator. Most recently, Dr. Friedman held executive positions at the Office of the National Coordinator for Health IT (ONC) in the U.S. Department of Health and Human Services. From 2007 to 2009 he was Deputy National Coordinator and from 2009 to 2011 he was ONC's Chief Scientific Officer. While at ONC, Friedman oversaw a diverse portfolio of nationwide activities that included a "learning health system" supporting research, public health, and quality improvement; the health IT workforce development program; the SHARP health IT research program; initiatives in usability and clinical decision support; evaluation of ONC's programs; and international cooperation for eHealth. He was the lead author of the first national health IT strategic plan which was released in June of 2008.

From 2003 to 2006 he was a senior scholar at the National Library of Medicine and from 2006 to 2007, he served as Associate Director for Research Informatics and Information Technology of the National Heart, Lung and Blood Institute, also serving as the Institute's chief information officer.

Prior to his work in the government, Dr. Friedman was Professor, Associate Vice Chancellor for Biomedical Informatics, and Founding Director of the Center for Biomedical Informatics at the University of Pittsburgh. He was responsible for management of information resources across the university's six schools of the health sciences. The center Friedman established at Pitt subsequently became an academic department.

He also served for many years in a range of faculty and administrative roles at the University of North Carolina at Chapel Hill. He was a professor in the departments of biomedical engineering and family medicine in the School of Medicine; he directed the Office of Educational Development and served as Assistant Dean for Medical Education and Medical Informatics.

In July 2014, Dr. Friedman became the Chair of the Department of Learning Health Sciences in the Medical School. more...

This image courtesy of Charles P. Friedman is shared under a CC BY NC SA license.

Syllabus
Handouts
Lectures
Back to Top