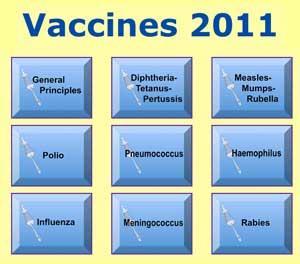 Historically, the notion of immunizing humans against infections actually preceded the development of the germ theory and the discovery of the first scientific vaccine (against smallpox) in the year 1796 by Edward Jenner. Various peoples of Africa and Asia knew that infected material from an ill person could be used to protect a healthy person from the same disease, even though they had no scientific understanding of the process. Variolation, the deliberate inoculation of smallpox lesional material into the skin of a healthy person, was widely practiced before Jenner. And although the practice was potentially dangerous, it was also effective in preventing the disease. A lot of progress has been made in the two centuries since vaccination has been introduced into mainstream medicine. Modern vaccines are safe and effective, and one can make a strong argument that they have contributed significantly to the longer life expectancy that we enjoy in our time.

Vaccines 2011 is an interactive learning program for first-year medical students. It covers some of the historical and theoretical background on immunization and offers details on the use of twelve common vaccines administered in the U.S.A. The instructional method is evocative, relying on the learner to make logical (or sometimes intuitive) choices based on their background in basic immunology and human development.